Brussels is a lively and ever-changing city. To move around more easily and enjoy the capital of Europe even more, the STIB-MIVB adapts and improves its services!

After the important changes of bus lines in September in the Northeast of Brussels, it’s now the turn of the Northwest. With these changes, the STIB-MIVB will improve the service on several routes, increase the capacity of the successful line 53, shorten some lines… Thanks to these new routes, there will be better connections between the municipalities of Anderlecht, Berchem-Sainte-Agathe / Sint-Agatha-Berchem, Jette, Koekelberg, Molenbeek-Saint-Jean / Sint-Jans-Molenbeek and the remaining part of the city.

Line 13 is extended from Simonis to metro station Etangs Noirs / Zwarte Vijvers via the current itinerary of line 20, to offer a direct relation between the municipalities of Ganshoren and Jette with metro lines 1 and 5.

Line 14 is extended from UZ Brussel until Heysel / Heizel via the current itinerary of line 84. With this extension, Heysel / Heizel and Arbre Ballon / Dikke Beuk are connected to the station Bruxelles-Nord / Brussel-Noord.

Line 20 is diverted between the stops Bastogne / Bastenaken and Etangs Noirs / Zwarte Vijvers via the metro station Osseghem / Ossegem. With this new itinerary, a new relation via Karreveld and a faster connection between bus 20 and metro lines 1 and 5 are created.

From now on, stops Sippelberg, Liberté / Vrijheid and Simonis are served by bus 49 and stops Vanhuffel and Autrique by bus 13. The connection between place Simonisplein and place Schweitzerplein is still possible with tram 19.

Line 49 is diverted from stop Bastogne / Bastenaken to the station Simonis via the current itinerary of line 20. With this new itinerary, a direct relation between boulevard Mettewielaan and station Simonis is created and a better service of line 49 is possible.

The section between Bastogne / Bastenaken and Bockstael will from now on be served by bus 53, which rides between Westland Shopping and Hôpital Militaire / Militair Hospitaal.

Line 53 will from now on be served by articulated buses with more places and comfort.

The section between Bockstael and UZ-VUB will from now on be served by bus 88 that maintains a relation between the neighborhoods Liebrecht, Dieleghem / Dielegem and Bockstael.

To offer a more direct relation between Berchem-Sainte-Agathe / Sint-Agatha-Berchem, Ganshoren, Jette and Heysel / Heizel, bus line 84 is replaced by the new bus line 83 which also rides between Heysel / Heizel and Berchem Station.

At the north, line 83 follows a new itinerary between the stops Palfijn and Bonaventure to serve hospital Brugmann. The section Palfijn – Bonaventure via UZ Brussel will from now on be served by bus 14.

At the other side of the line, line 83 follows a new itinerary between the stops Berchem Station and Nereus via the avenue Charles Quint / Keizer Karellaan. The section between Basilix and Nereus is still served by bus 87.

Line 88 is diverted from Bockstael to UZ Brussel via the current itinerary of line 53 (except hospital Brugmann) to offer a new direct and faster relation between Dieleghem / Dielegem, UZ Brussel, Jette, Bockstael, Tour et Taxis / Thurn en Taxis and the city centre.

Furthermore, line 88 is diverted via the station Bruxelles-Nord / Brussel-Noord instead of metro station Yser / IJzer. 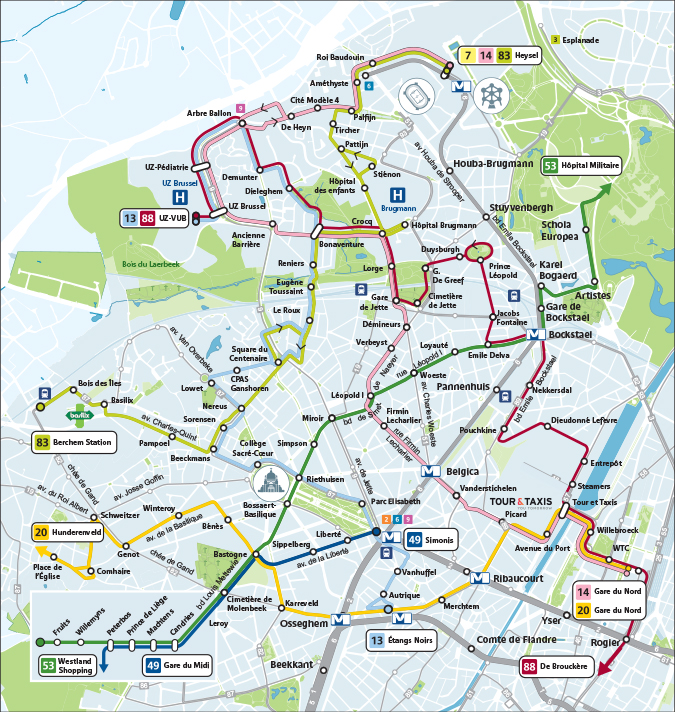