When should I travel?

We recommend that you travel in the morning (until noon) instead of the afternoon. In the present circumstances, everyone's behaviour has changed and the occupancy on our network is currently higher in the afternoon. In the past, this was the case during the weekends, but now, it is also the case during the week. The chart below presents the evolution of the current occupancy on our network compared to the occupancy before the Covid 19 crisis.

Globally, the occupancy has dropped by 50% comparing to the rate measured before the crisis. Since the beginning of July, the busiest time on our network is situated between 3:00 pm and 6:30 pm.

When is our network the busiest during the week?

Source: Incoming passages recorded by the gates at the entrance of the stations during the week between 1 July 2020 and 10 July 2020 compared to the period before the Carnival holiday of 2020 (before the lockdown).

Which are the busiest stations?

Do you want to avoid large crowds? Thanks to our occupancy ranking, you will be able to avoid the busiest stations. This data is based on the entrance and exit rates in the stations. It does not include connections. That is why a station such as Arts-Loi/Kunst-Wet is left out of the ranking, seeing 80% of its occupancy consists of connections.

This information is not available for the following stations: De Brouckère (metro side), Gare Centrale/Centraal Station, Clémenceau and Delacroix.

What are the busiest stations during the week? 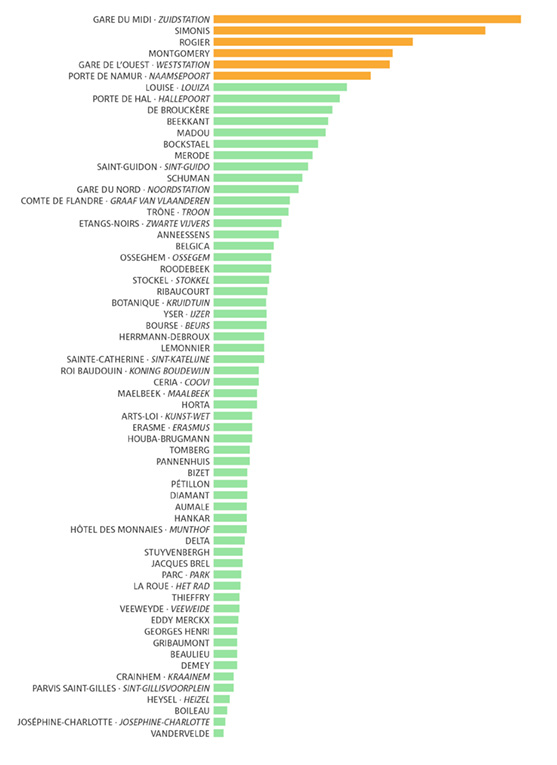 Source: Incoming passages recorded by the gates at the entrance of the stations during the week between 1 July 2020 and 10 July 2020 compared to the period before the Carnival holiday of 2020 (before the lockdown).

Currently, 40% of our bus and tram fleet is equipped with passage sensors, which allow us to count the number of people on board. STIB-MIVB aims at gradually install this type of sensors on every bus and tram by 2025.

Does your favourite line have sensors*? Click here to check the best hour to travel safely!

See the occupancy of my line or station ➔

* Not every vehicle of each line of the network is equipped with these passage sensors.